Join us and a host of  musicians as we celebrate the life of musician Shawn Scott Jones with a special Memorial Jam on Sunday 26th of February at JJ Smyths, 12 Aungier Street.

All funds raised have very kindly been pledged to the Musical Youth Foundation in memory of Shawn and with thanks to Orla Jones. 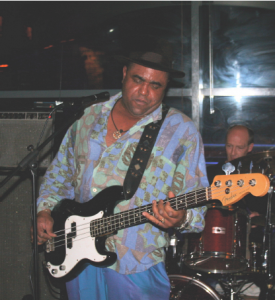 Born in Philadelphia PA a city rich in Jazz tradition Shawn Scott Jones was exposed to a wide variety of musical styles. His first experience of performing was at the age of six when his participated in a school play. Studying piano at the age of

seven gave him a foundation of musical theory at an early age. Later Shawn switched to Bass, studying at the Settlement School in Philadelphia. While living in Philadelphia he began doing many recording sessions, song demos, jingles and album track for a variety of artist. At about this time he met bassist Jamaladeen Tacuma with whom he recorded a cd released on ITM records called Intense. On this project Shawn wrote, arranged and produced the music on this cd which was released in Germany and the rest of Europe. At this time Shawn toured Europe in support of this cd with great enthusiasm.

At about this time Shawn moved to London where he met Pete Townsend of The Who and was asked to record tracks for a solo Album. Shawn then began studying avant gaurd Jazz and free Jazz and improvisation. While in London he worked in many musical situations and taught Bass privately and did many recording sessions. After 3 years in London

Shawn returned to the US where he became friends with Bass innovator Jaco Pastorious who taught him the intricacies of improvisational theory relating to the Bass and drums. His influence on Shawns style of playing was unmistakable Later he was asked to play with Saxophonist Ornett Coleman who pioneered the free Jazz improvisational movement in the mid 1950s. He came up with the term harmalotics which uses harmony and melody without chords as a basis of  improvisation. Then he began working with many free Jazz musician in the Philadelphia New York area. Artists that Shawn has worked with during this period include Charles Erland, Allen Holdsworth,Ginger Baker and member of the Sun Ra Arkastra.

Shawn moved to Dublin six years ago. He has been an educator at Rush Youth Reach,where part of the music curriculum was students having the opportunity to write songs and go into a recording studio and produce a CD. He was involved in education working with students of St.Michaels House in Skerries. Shawn has toured Europe with Irish musician Liam O’Conner who plays button acordian . His Jazz band The Jasmine Quartet has played throughout Dublin, Cork, Holland and Germany.  Before his untimly passing Shawn was working with musicians and jazz innovators Mike Stern, whom he has known for 25 years and saxaphonist David Murray writing and producing music that is challenging, exciting and inovative in the context of improvisational free Jazz.