The Minister for Children & Youth Affairs Frances Fitzgerald joined US Jazz and Soul singing sensation Carmen Browne and festival and charity founder Chris Maher in Dublin today to announce details for the 7th annual Dublin City Soul Festival celebrations which will take place from 23 – 26 May. 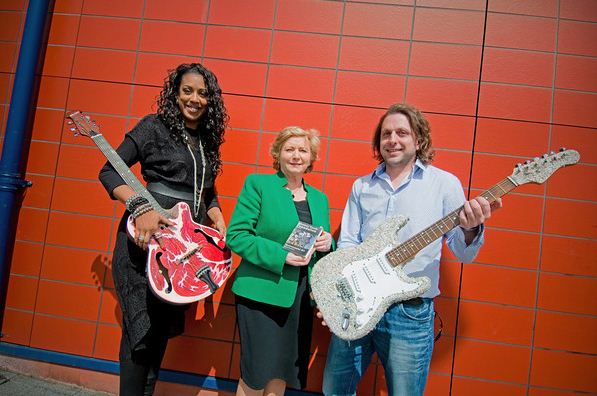 During the launch the Minister was shown a selection of pieces from the charity’s Instrumental Art collection including the ‘Guitar of Note’ by billioneurohouse.com artist Frank Buckley. The guitar, donated by Buckley, is covered in thousands worth of decommissioned euro currency and is just one of ten totally unique pieces going for online auction as part of the festival. Auction-goers can view and bid on the collection at www.stubhubcharityauctions.co.uk from May 16th. All funds raised from the auction will go to the festivals charity, the Musical Youth Foundation which is working to provide every child on the island of Ireland with access to a musical education.

This year’s Dublin City Soul Festival culminates with one of Dublin’s best kept musical secrets – two days of live music from a selection of the very best local, national and international artists at the annual Soul Picnic. The free to attend family friendly music concert takes place in the beautiful surroundings of Merrion Square Park on Saturday 25th and Sunday 26th of May from 12pm – 6pm (gates 9am) each day. While there is no admission charge, organisers are asking adults to make a donation of just €5. ‘or whatever you can afford’ to the Musical Youth Foundation. Donations received during last year’s sunshine filled event helped 100 at-risk children benefit from free weekly music lessons, practise sessions and instruments. This year, as a Thank You, the first 4,500 donors will be entered into a special draw where they could win one of 15 exclusive Instrumental Art pieces donated to the charity by some of Ireland’s best artists, designers and musicians as part of an earlier project by the innovative charity.

The festival team, including volunteer staff from eBay company StubHub which announced a partnership with the charity earlier this year, will provide a warm Céad míle fáilte to festival goers. Thousands are expected to gather in Merrion Square Park again this year to join the annual feel-good celebration renowned for its uniquely chilled out atmosphere and magical climate. Regular Soul Festival attendees will know that the Soul Picnic has so far always benefited from blistering sunshine with last year’s event falling on the best two days of the year and not for the first, second or even third time. 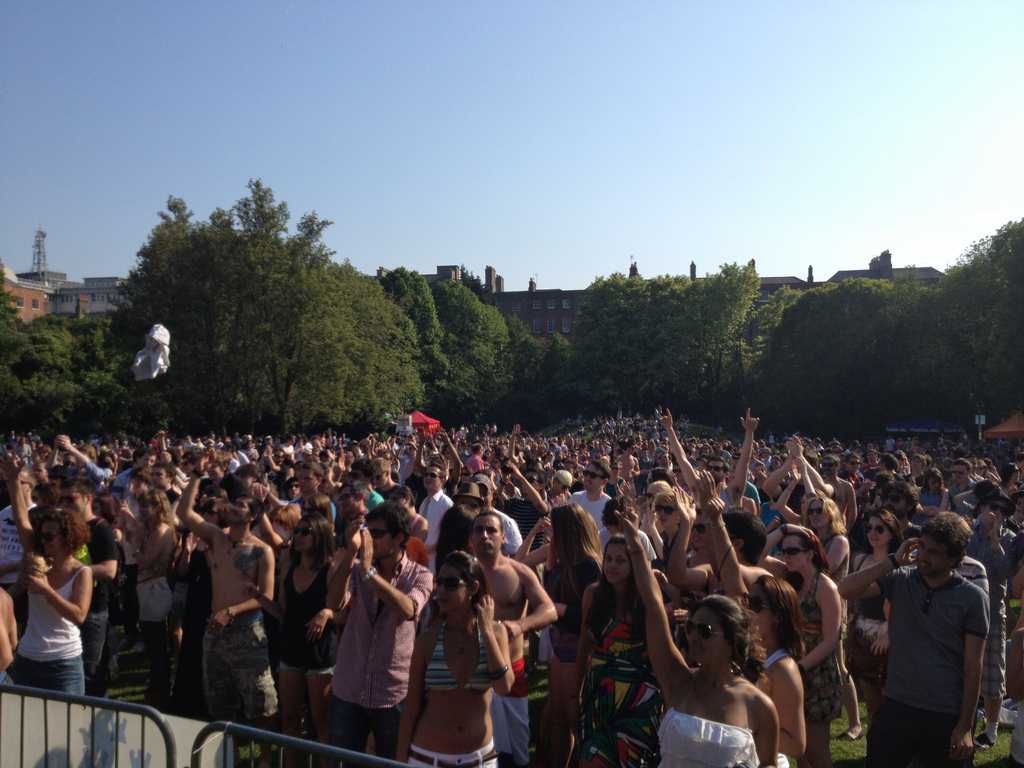 Festival boss Chris Maher, who is also the Station Manager at Christmas FM, went out on a limb by predicting this year’s event would once again coincide with the arrival of the beautiful Irish sunshine. “Summer starts on May 25th and will last for at least two days” he joked “obviously there’s no guarantees with the Irish weather so come prepared with picnic blanket, sun tan lotion and rain gear.“ Maher went on say; “The Soul Picnic is an event filled with smiling faces, everybody united in a celebration of the positive. Soul Picnic is good for your health, the perfect chance for friends and family to come together and just enjoy life away from the daily stresses and strains.”

Asked about other artists that would join the exclusive club of musicians who can say they’ve played on stage in Merrion Square Park Maher said; “I’m sworn to secrecy for operational reasons but I can confirm that our honorary Soul Festival House Band will be back following hundreds of requests from fans. They really dominated the stage last year, with a grand finale set that had over 4,500 soul-picnickers dancing to James Brown inspired funk in the heart of Dublin City. It was really something special to see, the audience were united in their call for an encore. The memory has helped keep me focused on making this year’s event a reality despite the challenges.”

“It’s actually two different bands, Soul Power and The Goods. They’ve been involved in the festival since our launch in May 2007 and have become a deserved firm fixture. They’re always the first on the list.”

Also revealed today was this year’s official Festival Club, Leeson Street favourite The Sugar Club. The venue will host a series of special live music shows programmed by Choice Cuts. The gigs taking place in The Sugar Club include a hotly anticipated night with music legend Tony Allen (Fela Kuti’ band leader) who will be joined on-stage by Colours Afrobeat Foundation on Saturday May 25th from 8pm. Tickets for this show are selling fast at just €20. + fees from usual outlets.

As drummer and musical director for Fela Kuti’s band between 1968 and 1979, Tony Allen was one of the primary co-founders of the genre of Afrobeat music. In the words of Fela Kuti, “without Tony Allen there would be no Afrobeat.”

Further details of all the events taking place as part of this year’s Dublin City Soul Festival are available from www.soul.ie.

Brainchild of charity founder & CEO Chris Maher, the Dublin City Soul Festival was established in May 2007 and has gone on to win an Irish Times Living Dublin Award for Culture and Tourism. Since then the festival has hosted over 169,150 attendees, attracting hundreds of valuable Cultural Tourists from around the globe and generating in the region of €1 million* annually for the Irish economy. The Soul Picnic is supported in part by Dublin City Council (€10k) and Failte Ireland (€4k). The Musical Youth Foundation, another of Maher’ creations, was born out of the Soul Festival project and is helping at-risk children in Ireland access a musical education and all its associated life-changing benefits.

Later this year the charity will launch a nationwide music education advocacy campaign dubbed ‘Music Changed My Life’ which will feature video messages from a host of well-known musicians including Grammy Award Winners. Those already interviewed include President of Ireland Michael D Higgins, Ministers for Education and for Children & Youth Affairs among many others. Members of the public are invited to share their own “music changed my life” story by posting a video message on the Musical Youth Foundation Facebook page.

For further information or to arrange interviews please contact:
Anna Clarges
info@musicalyouthfoundation.org
087 148 8098
Full Press Pack available via our website at www.soul.ie
(scroll to bottom of page and click on Press Pack under Details)