The 21st European Social Services Conference took place in Dublin on 17-19 June 2013 in partnership with the Irish Presidency of the European Union. The theme of the conference was ‘Transforming Lives! Reshaping services for a changing society’.

As part of the overall schedule of events a Gala Dinner was hosted in The Burlington Hotel and the Musical Youth Foundation was given the honour of providing the musical entertainment along with a €2,000. donation from the European Social Network, who run the important annual conference.

County Tyrone based Trad / Folk group The Logues were drafted in by the MYF  to perform for the 350 European delegates who attended the event. 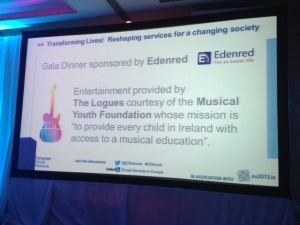 In a challenging economic environment, the conference brought together over 350 delegates from over 35 countries to discuss the importance of social investment to transform the lives of all our citizens, bringing about changes in the way services are designed, delivered and evaluated.